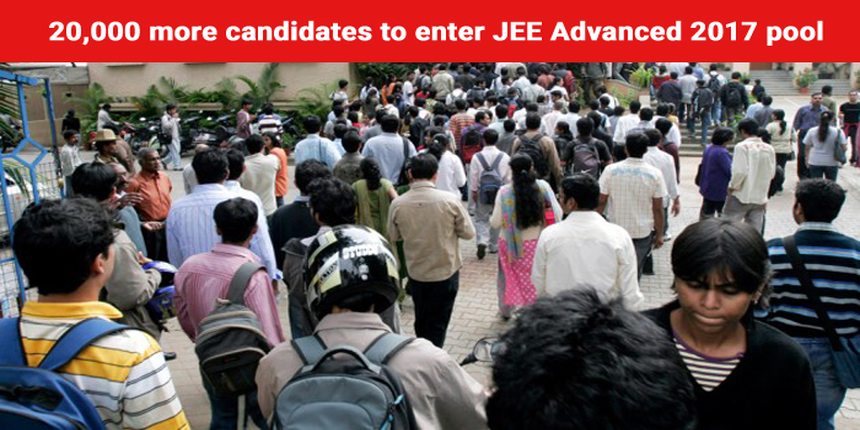 The move comes a few days after the Ministry of Human Resource Development has asked IITs to increase their seat intake. However, no official announcement on any decision pertaining to this proposal of increasing seats has been made so far. According to a report by Times of India, IITs plan to open their doors for admitting non-resident students. The premier institutes plan to add 30,000 seats by 2020, thereby creating 1 lakh seats across all IITs in UG, PG and doctorate programmes.

At present, IITs (including ISM Dhanbad) altogether have around 72,000 engineering seats in UG, PG and doctorate programmes. As per media reports, 10,000 seats will be added every year to make it 1 lakh by the year 2020.

In 2015 also, about 18 per cent of the total eligible candidates for JEE Advanced had not filled the application form for IIT admissions. A total of 1, 52, 000 candidates had qualified for JEE Advanced in 2015, whereas only 1,24,000 had registered for it.

The IIT admission data for 2015-16 and 2016-17 shows that more candidates are loosing interest in IIT Admissions. The data in the table signifies this.

3000 seats vacant in NITs, IIITs and GFTIs: Why did seats remain vacant?

IIT admissions 2016: Vacancy increases by 100 per cent at IITs

Stay tuned to engineering.careers360.com for more news and updates on JEE Advanced 2017.

I got 75percent in jee mains January 2020 under BC category will i apply for jee advance?

HELLO ASHWINI
since it is very difficult to predict the exact rank but we do have a backup> we have a formula to calculate the expected rank that is (100 – Total percentile) x 869010/100.So according to formula your expected rank for present percentile for January session comes out to be 217252 . Now the expected rank might change depending on the no of candidates appearing the april session. For ex if 12 lakh candidate appear the april session then just replace 869010 by 12 lakhs. But if you score above 85 percentile then you have a very decent chance of qualifying jee mains.
Well since the cutoffs are yet to be decided let us analyse using previous year cutoff
2019
Other Backward Classes (OBC-NCL)  74.3166557
It seems you are very close to the OBC cutoff you have a minor chances of qualifying JEE mains.

But if you are curious to know that which college you might land into with your percentile then you can use the college predictor link which has following features;